MPI attempts to limit the number of photographs taken in Chureca by its volunteers in order to respect the privacy of the community members, and also with a desire to reduce as a spectacle what is, sadly yet certainly, a home. However, we do respect the power of visual stimulus to carry the reality of the dump beyond its confines, and the amazing work of friend of Manna Brian Shumway does exactly that:

La Chureca by Brian Shumway
Posted by Ian Rountree at 6:41 PM No comments:

Our visitations last Thursday to families in our Child Sponsorship Program took us through the heaviest fumes my lungs have yet braved. With burning eyes and failing voices, we walked through white smoke so thick that shadows cut visible swaths of black in the milky air. Though worried for her, it was no surprise that Maudelia's two year-old daughter, who she carried at her side, carried in turn a coarse and incessant cough.

As we rounded a corner of the single-room school that services the area, I noticed a boy gazing down at us from his perch in the leafless branches of a tree that barely rose above the corrugated metal separating his house from the next. He wore only tattered shorts and splashed mud on his chest. He looked to be well past seven, the age at which Nicaraguan children begin their schooling.

After trading his name for mine I asked, "Y porque no andas en escuela?" And why are you not in school?

In the broken Nicañole that Chureca teaches its children, he patiently explained that he was not permitted the luxury of an education because the house could not be left unattended while his father worked in the trash.

Left with a piercing feeling of impotence and that now familiar loss for words, my gaze fell through the fumes to my feet and the mange-riden animal not far from them. The seconds passed, and not knowing what else to say to my new friend whose unfortunate predicament I had just reminded him of, I absent-mindedly directed my next words to the dog at my feet. "Qué nota, perro?" What's up, dog?

Laughter suddenly burst through the air. Surprised and confused, my downtrodden spirit eagerly soaked in his broad smile and careless cackles. And, in that moment, as his laughter infected the air, I knew that it was no less real than the smoke it joined.

As living conditions range, nothing that I have known has any liberty to call itself Chureca's peer. This reality in mind, I am constantly perplexed that thoughts of my mornings in that desolate place are inexorably... joyful. Though seemingly counterintuitive, I cannot ignore that each visit brings cheer with a frequency almost insultingly disproportionate to the surrounding destitution.

Nicaragua's second discourse, taught in strife witnessed and smiles wielded, has been that whether life exists in privilege or penury, whether found on marble floors or shattered glass, joy is resilient.

Posted by Ian Rountree at 11:03 AM No comments: 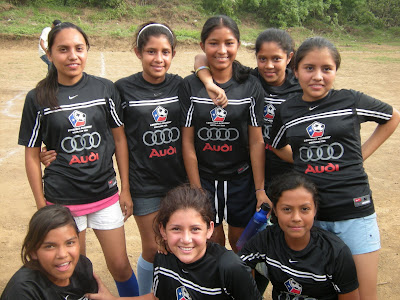 Chiqui girls ready to play in their uniforms!
After many phone calls, missed turns, and false alarms, the Chiqui girl's soccer team finally played the Chureca girl's soccer team. Manna Project sponsors a team that practices once a week at the field over at El Salero. The girls who come are mostly from 13.5 and Cedro Galan near El Farito, and bonding those two groups was a main goal of the soccer program. Juntos Contigo, a Nicaraguan non-profit that works in Chureca right next to the clinic, has their own team, coached by our friends Roger and Ruben. Many of the girls on the Chureca team attend our English class and the majority of the Chiqui girls participate in at least one other Manna program.
For the game, the fearless Manna coaches, Kelly and I, recruited Daniel to be the referee, gathered all of our gear (donated uniforms, extra sneakers for girls who don't have them, balls, goalie gloves...) and somehow managed to pick up all of the girls in time for the scheduled 3:30 match. Okay, maybe we were ten minutes late, but thanks to the "hora nica" that counts as being on time.
The two teams had met three times before, twice in Chiqui and once in Chureca, and the home team won each game, so I expected our away game to be challenging. The Chureca "field" is really more of a bumpy dirt pit--there isn't a single blade of grass in sight. I wasn't just nervous about the field though, or even the dubious skills of our players. I'd spoken to girls on both sides who regaled me with stories of how dirty the opposing team played. They even told me that two of the girls, ironically each being one of the most timid on their respective teams, got into a physical fight that Michael had to separate. Some even pronounced that they would skip the game because they were afraid, although their incessant questioning about the time and date of the game tipped me off that their assertions were merely idle threats. For two weeks before the game, every time I saw the girls either in Chureca or around the community, I emphasized that the match was strictly friendly and that I expected them to play cleanly with absolutely no fighting. In addition, I read the rules (no fighting, support your teammates, respect the referee and coaches) to the team in the micro on the ride over to Chureca. 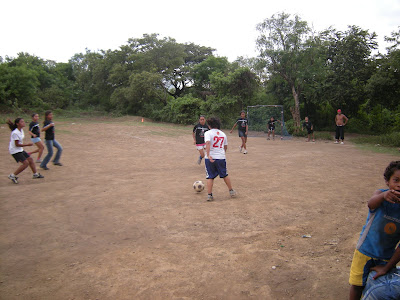 Action shot during the game
Luckily, the repetitive lectures paid off and we finished the game without a single raised fist. We played two twenty minute halves with impeccable refereeing by Daniel. Some of the girls really surprised me with their dedication and everyone contributed to the team effort. Highlights included an end of the first half save by Norma, the time when Idalia actually answered her cell phone during the game, a kick that bounced off of the heads of three unsuspecting fans, a corner kick to header play by Flora and Jennifer on the Chureca side that narrowly missed our goal, and, of course, the final shoot out. We ended the game tied 0-0 and the coaches on both sides would have been content to leave the game a draw, but the girls unanimously protested, demanding penalty kicks. The first set of five penalty kicks resulted in another tie, 1-1, and we ended up each doing two more, and unfortunately for us, Flora placed a perfect shot in the corner of the net and the Chureca team won.
All in all, I was so proud of all of the girls on both sides. When we were entering Chureca, Kelly and I looked at each other and wondered how the Chiqui girls felt driving in through the trash. Since it was their second visit, they seemed accustomed to the surroundings so I can't speak to their first impressions. I think now they see Chureca simply as a place to play against another team, unlike many people in Managua who see Chureca as the country's dirty secret and turn down their nose at the community. I hope that the Chiqui girls have gained an awareness of both the startling reality of the dump but now, with our second visit, the humanity of the people who live within it. 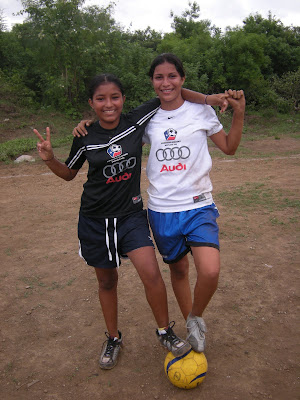 Karen (Chiqui) and Jennifer (Chureca)
Many people asked me why we were having the game in Chureca instead of at the beautiful grassy field on the August family's land. It's definitely a valid question, but I think that our decision to play the away game reflects upon our commitment to respecting the residents of Chureca as equals and as a valid community in their own right. I remember the pride that I felt when playing a home game with my high school team, and the Chureca girls felt that same pride, even though their field is essentially a plot of dirt. Playing on neatly clipped grass isn't always the best for everyone--the Chureca girls have an advantage on their field since they rountinely play on the dirt and know how to navigate the bumpy ground. In addition, they had the support of a crowd of fans who clustered around the field and sat on the wall that delineated one of the sidelines cheering for the home team. I saw that the game built community in many ways--between the Chiqui girls on our team, between the Chureca girls on their team, within Chureca between the players and their supporters, and especially between the two neighborhoods. One of our Chiqui friends, Karen, has been coming to the Chureca English class for a while now and has become friends with many of the girls on the Chureca team. I think that their friendships helped to maintain the positive tone of the game. Little developments such as these make me feel that something as small as organizing a soccer game can really make a difference in connecting communities and I feel so much cariño for all of the girls that I love seeing them develop friendships with one another through the games.
Anina Hewey
Program Director
MPI Nicaragua
Posted by Ian Rountree at 10:24 PM 1 comment: