I was first made aware of La Chureca a little over two years ago on an alternative spring break trip through the Nicaraguan Orphan Fund at James Madison University. Over 200 college students from four universities in Virginia joined Brad Corrigan, former drummer of the band Dispatch, for el Dia de Luz (Day of Light). We journeyed into the trash to help salvage recyclables, flew kites, attempted to compete with the kids in soccer matches, gave endless amounts of piggyback rides, danced to the music performed by Braddigan, and ultimately dedicated the day to loving this special community. El Dia de Luz (http://dayoflightmovie.com/trailer/) was captured on film and turned into a documentary which was released earlier this year.

After watching the documentary, I was reminded of how crazy life can be in La Chureca. Back in the United States, from the comfort of a cushioned couch in an air conditioned room, it’s easy to not recognize the struggles that 2,000 people are challenged with daily. While I may sometimes complain about cooking, I always have ample amounts of food available. While I may get frustrated about not finding the perfect outfit to wear out, I have clothes. While I may dread studying for exams, I have the opportunity to receive an education. These are all things I tend to take for granted living in the United States. The documentary conjured my passion to serve those in La Chureca, and I applied to be a summer volunteer with Manna Project. 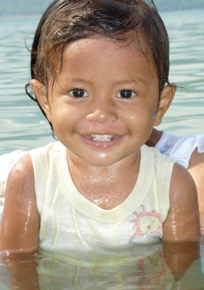 One of Manna's sponsored children swims at Laguna Xiloa
During my first week serving with Manna, we hosted a field trip to a laguna for the families participating in the Child Sponsorship program in La Chureca. As the families boarded the bus to leave for the laguna, I remember one of the program directors commenting that she almost didn’t recognize one of the children. When I asked why, she said because he was dressed so nicely. My next question was what does he usually wear? She said he usually wears nothing.
As I began making home visits with the Child Sponsorship team, there was more than one moment where I had to take a step back to myself after witnessing the reality of this unfathomable poverty. We walked by a house with a small child maybe around two years old playing with Garcia, the tie died bear beanie baby. His Garcia had a torn off leg and the once bright colors were beyond faded and coated with mud. I once owned the same Garcia bear plus probably 4 dozen more of Garcia’s beanie baby friends.
Spending time in La Chureca, I’ve come to realize that there is also an overwhelming hope and joy which shines through the darkness and poverty. I remember when the children came to the clinic to receive their vitamins, oatmeal and milk for the month from the Child Sponsorship program. A recently enrolled child ran around my feet with the biggest smile playing peek-a-boo while he waited his turn to be weighed and measured. I remember a child leaping for joy as he won a game of “chebolas” (marbles). I also remember the smile that greeted me from one of the parents who recognized me from the laguna field trip weeks prior. I’ve learned despite the fact that the families have next to nothing, they do own some of the most heartfelt smiles I’ve ever seen.
My time in Nicaragua is (too) quickly coming to an end. I’ve spent the past month stretching my comfort zone, and now I am packing to return to my familiar life in Virginia. I am continuing to process my experiences and am challenged to share a new perspective as I return to the States. Each Nica smile has truly left an imprint on my heart.
Joanna Lang
Summer Volunteer '10
Posted by Ian Rountree at 12:25 PM No comments: