Hi everyone!
Here's the first in my efforts to capture aspects of living/working in Managua with MPI NICA:
Transportation from Jan Margaret Rogers on Vimeo.
Enjoy,
Jan Margaret
Program Director, 2009-2010
Posted by Jan Margaret at 8:24 AM 2 comments:

Email ThisBlogThis!Share to TwitterShare to FacebookShare to Pinterest
Labels: Transportation

A New Video for MPI Nicaragua

Dying for a closer look at what we do? Check out our new video highlighting Manna Project Nicaragua!

Manna Project International from Ashley Zeiger on Vimeo.
Posted by Ian Rountree at 1:22 PM No comments:

Email ThisBlogThis!Share to TwitterShare to FacebookShare to Pinterest
Labels: Videos

Apply to be a Summer Volunteer!

The MPI Summer Program gives volunteers experience working with a non-profit and serving an underprivileged population. The program integrates the volunteers into the daily functions of MPI Program Directors as they assist in daily programs, planning classes, and instructing lessons. Volunteers will get a snapshot of MPI´s longterm goals in action, seeing how their trip contributes to the greater pictures of community development. 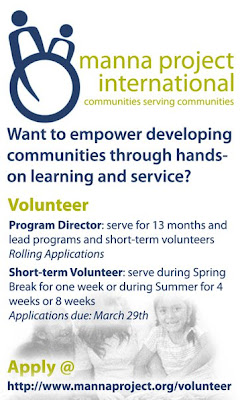 There is ample opportunity for volunteers to interact with the local community through established programs and on their own initiative. Volunteers are encouraged to put their education and passions to use by making suggestions or recognizing new areas in which MPI could better serve the community.

Summer Volunteers are to be college-aged and ready to utilize their energy, enthusiasm, and intelligence to contribute to the on-going development in the local community. Weekdays are full of possible projects, and the volunteers will be as busy as they choose to be. Weekends are often open for travel around the beautiful country in search of diverse cultural and tourist locations.

If you have any questions, please send us an email at summer@mannaproject.org.

Applications are available at www.mannproject.org/short-term
Posted by Ian Rountree at 4:40 PM No comments:

The Child Sponsorship team hit the ground running upon our return to La Chureca in early January 2010. An increase in sponsors and the graduation of several saludable (healthy!) children allowed us to add four new children to our program. As more sponsors and positions become available, we are seeking to enter even more children in February, especially younger children and siblings of current program participants. Currently, we offer each participant a monthly supply of oatmeal, milk, and vitamins, and our goal is to alleviate undernourishment in La Chureca. 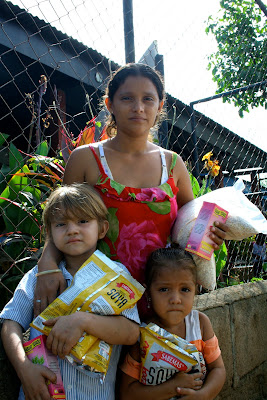 Coming back, I immediately noticed the striking progress being made on the Spanish MegaProject to transform La Chureca. When the Spanish Vice President María Teresa Fernández de la Vega stopped to view La Chureca on her tour of Central/South America, she was greatly impacted by the horror of people living and working in trash heaps. Her personal commitment for change encouraged the government of Spain to commit 30 million Euros (the equivalent of 45 million USD) to bring dignity to the people of La Chureca. The Spanish government has had a noticeable presence in Chureca and has held many meetings with community members and NGOs to discuss how to create a holistic solution to the problems faced by those dwelling in La Chureca. According to a 2008 article by William Grigsby Vergara, the solution involves closing down the dump, creating an alternative recycling system, and providing housing alternatives for the residents of Chureca. I have personally witnessed how Chureca is “closing down” - the once heaped trash has been transformed into a flatter plain, dirt roads have been created on the neighborhood/trash divide, and signs declaring the Spanish equivalent of “Authorized Personnel Only” are posted next to entrances to the trash. This has not kept any of the Churequeros from continuing their work in the trash, but it has provided a visual to confirm that action is indeed underway.

Read more about The "New" Chureca: From Grace to Human Dignity.

Posted by Jan Margaret at 2:49 PM No comments: