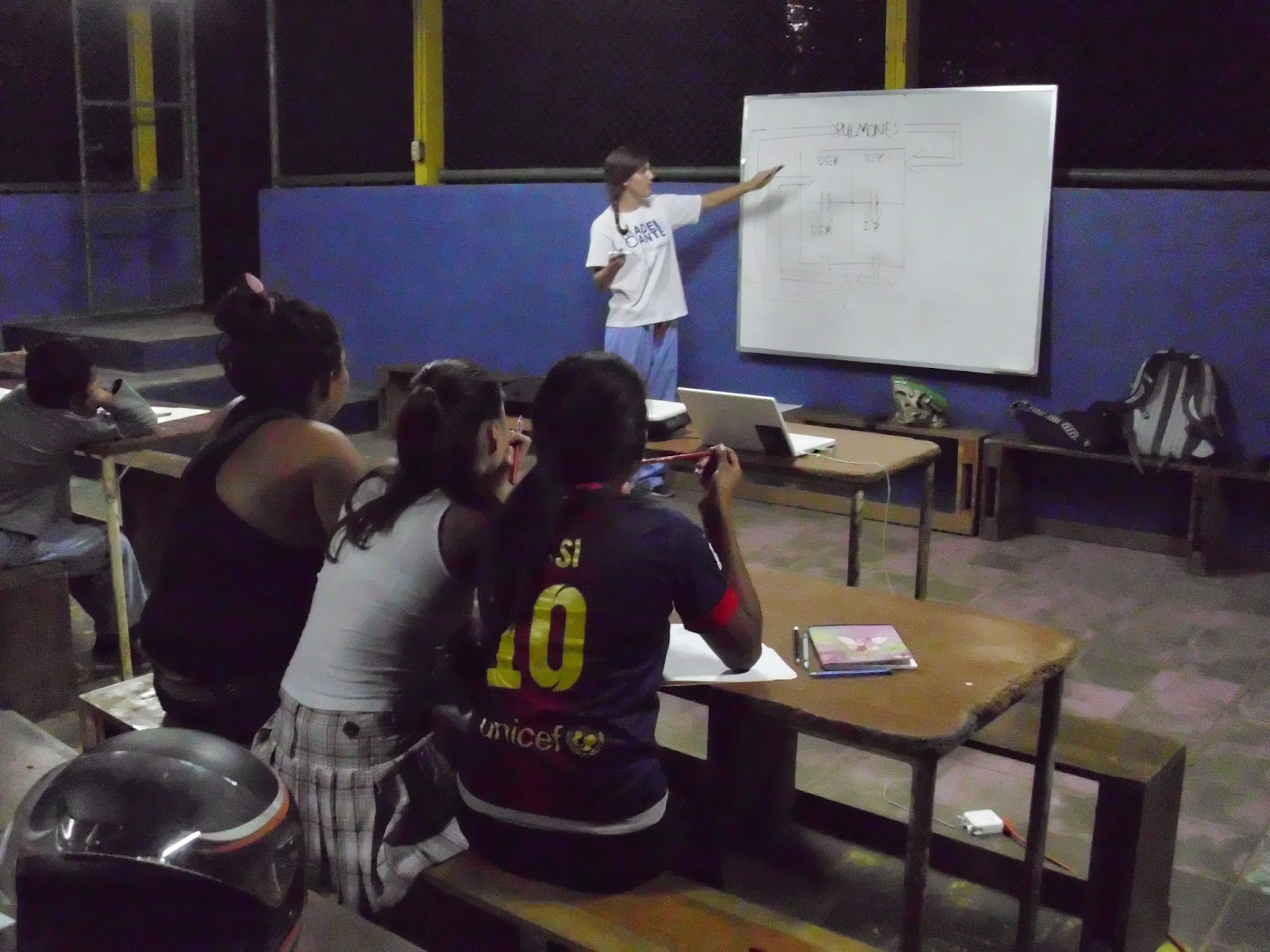 The past week in Nicaragua has been an exciting one for Cedro Health.  We've started a new round of our Generation class, with 18 new students present for the first lesson. Generation is an education and mentorship program for adolescents wanting to enter the medical field.  We teach classes on everything from major body systems to how to take blood pressure.

During the first lesson on Wednesday night, our new students were broken up into small groups and learned how to properly find a pulse and calculate a heart rate.  We then segued into our lesson on the cardiovascular system.  During the next lesson on Monday night, we focused focused on the flow of blood from the heart to the body and lungs.  We finally learned how and why doctors use a stethoscope.  Their homework is to take the pulse of five people in their family. 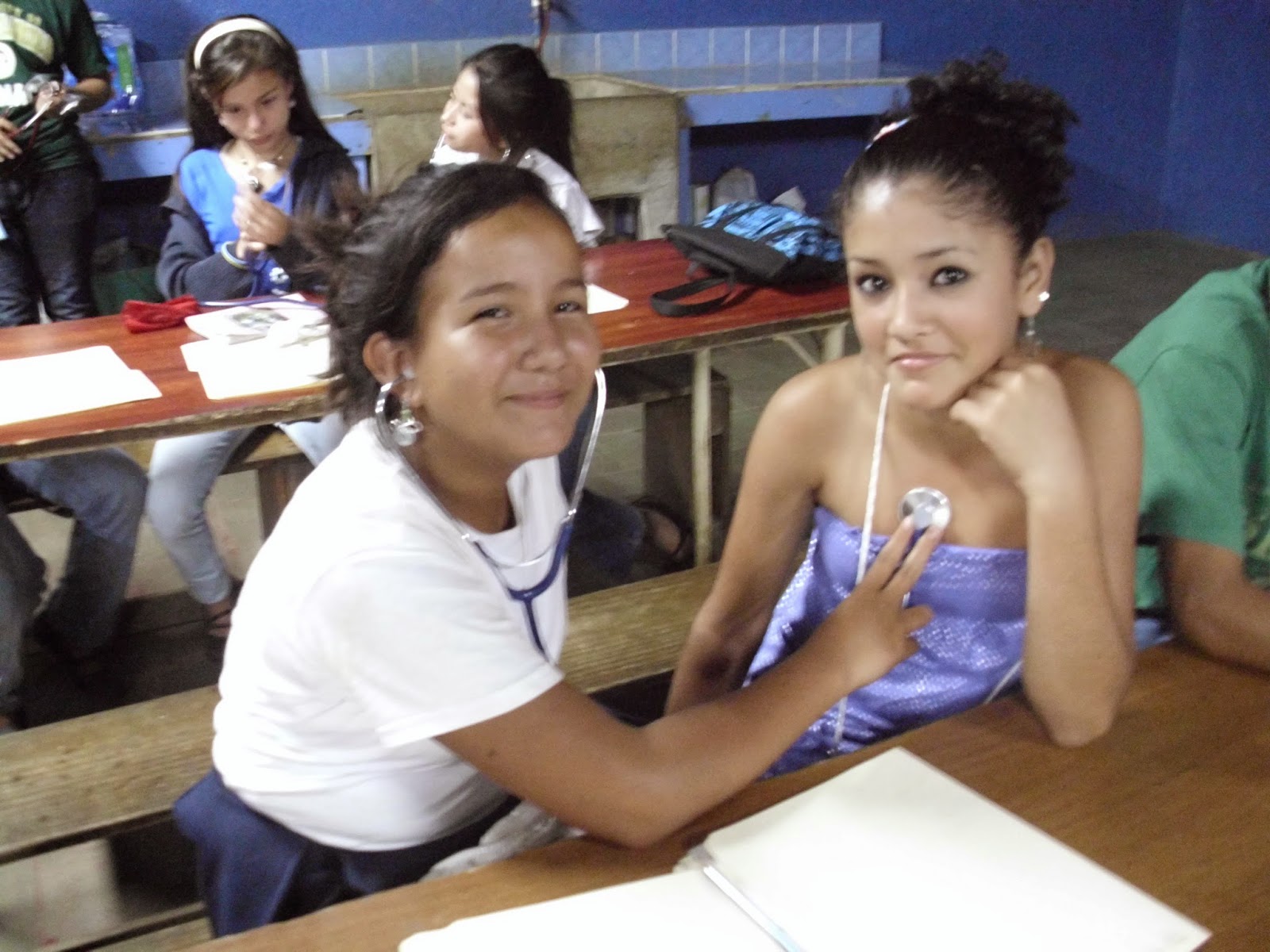 Generation class is something that never fails to warm my heart.  It's amazing to see a group of eager students give up a weeknight just to learn more about medicine.  As all of us "profes" climbed into the micro full of students to go to class, and they greeted us with huge smiles and hugs as they talked about how excited they were to learn.  As we dropped them off at the end of the night, they said they couldn't wait for the next lesson. 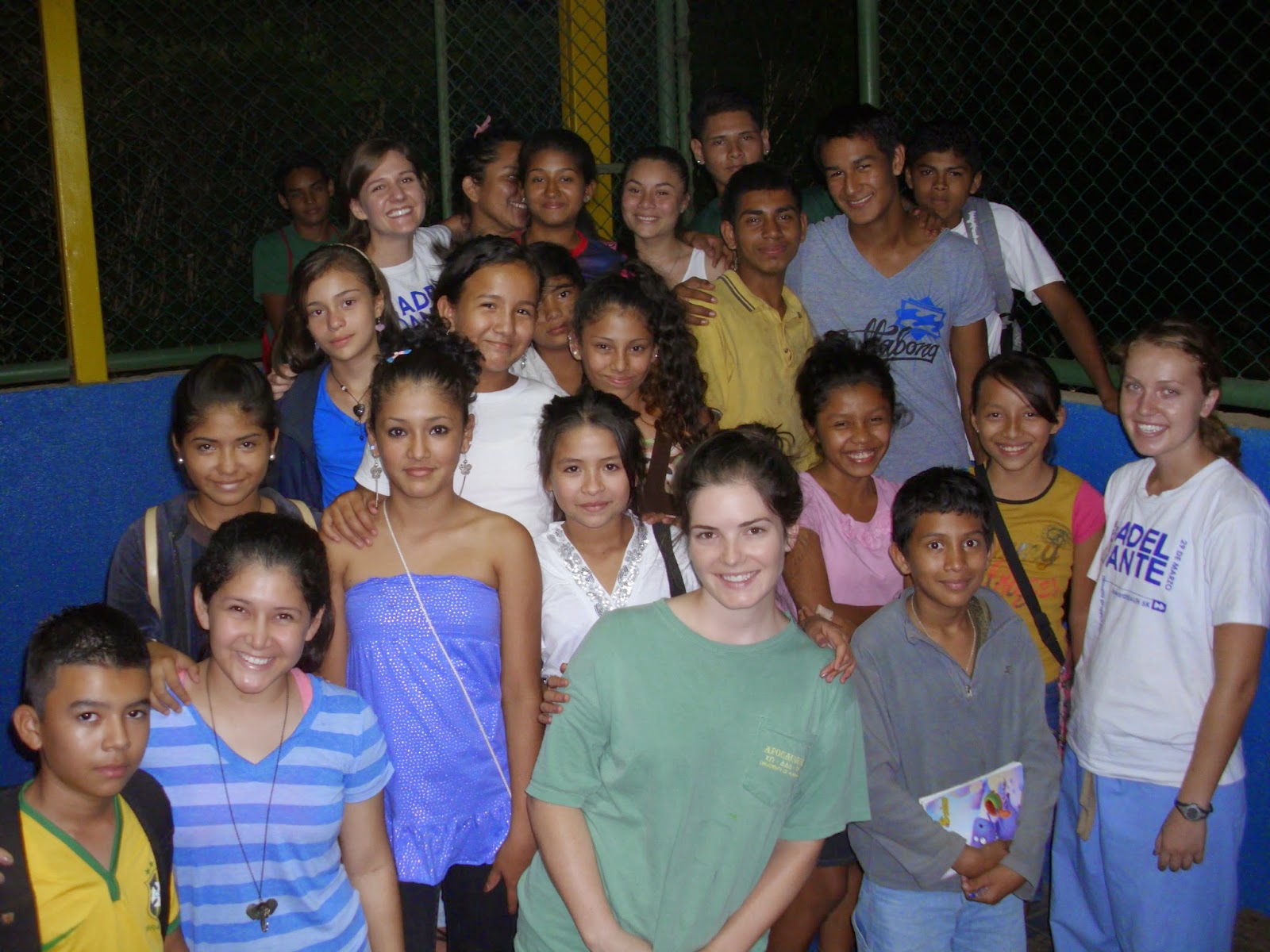 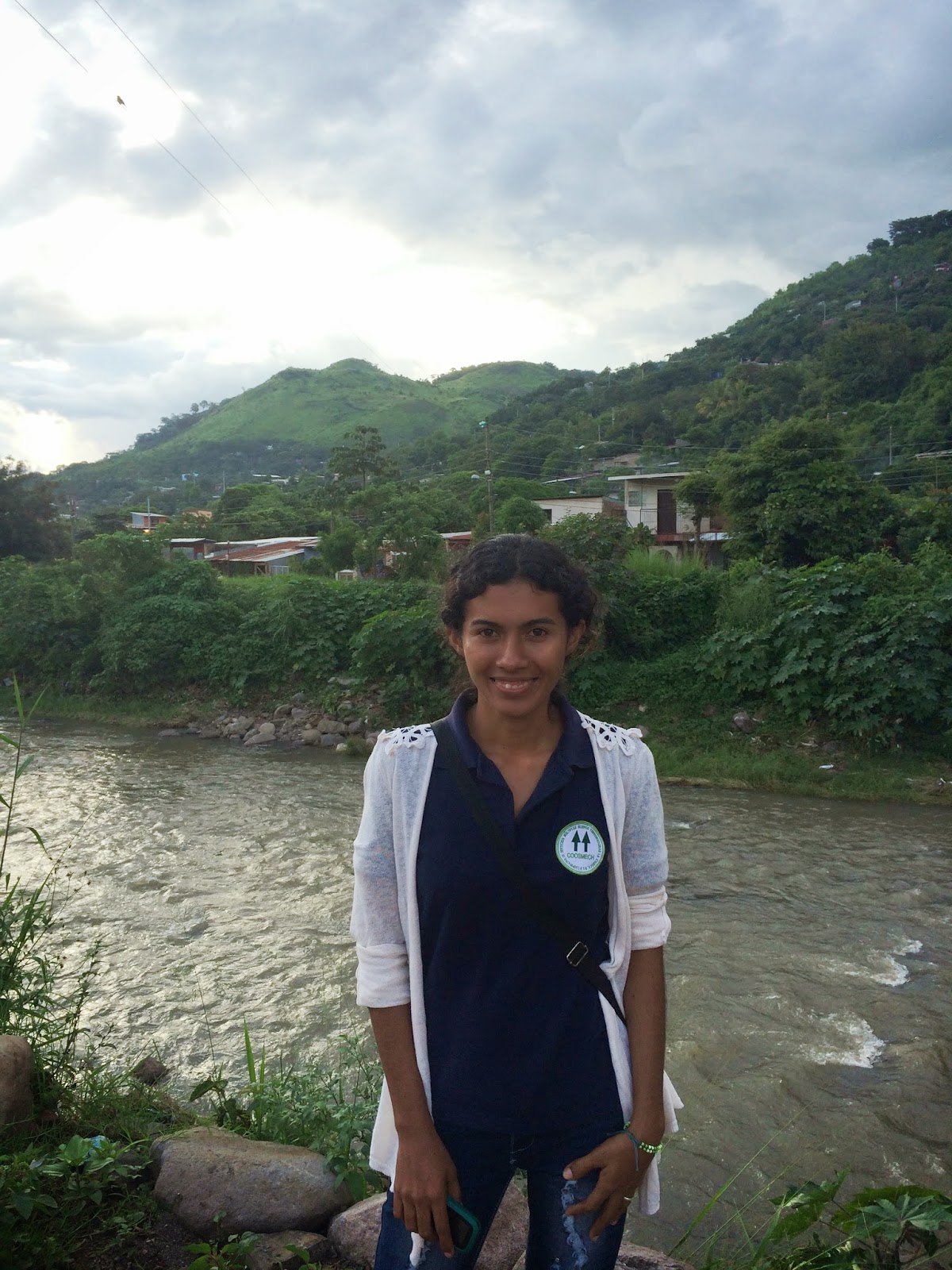 ​As someone who’s principal role on the jewelry team is behind the scenes, I found it challenging to establish relationships with the women in the cooperative at first. I help manage Camino Nuevo inventory, and my role mainly deals with material preparation and collection rather than direct interaction with the women. In addition to our primary roles, each PD on jewelry has been assigned one or two different cities in Nicaragua where they visit once a month and investigate potential vendors and different opportunities for selling Camino Nuevo Jewelry on a national level. We are strongly encouraged to take one of the cooperative women with us on our “market surveys” (when we visit our respective cities). Initially, I was somewhat apprehensive about taking a woman with me, especially because my market, Matagalpa, is one of the farthest markets we have, and the trip there and back is a whole day affair.
​Jenny, the woman who volunteered to accompany me, and I met near the bus station at 6:00 a.m. and did not return until 8:30 p.m. that night. Needless to say, it was a very long initial hangout! However, it was also one of my favorite days in Nicaragua. Jenny had only left the city limits of Managua a couple of times, and this trip was her first time to venture this far around herown country. Both of us spent the bus ride marveling at the change in topography, and Jenny continually pointed to the mountains and greenery outside saying, “Mira Katy, WOW!!” After our morning sales-stops, we ate lunch at a quaint Italian restaurant, a cuisine she had never tried before. After lunch we continued visiting different hotels in the city center, and Jenny became increasingly vocal and confident with each new hostel owner we interacted with. Jenny is soft-spoken and can be timid at first, but by the end of the day, I felt like she could be a one-woman show! 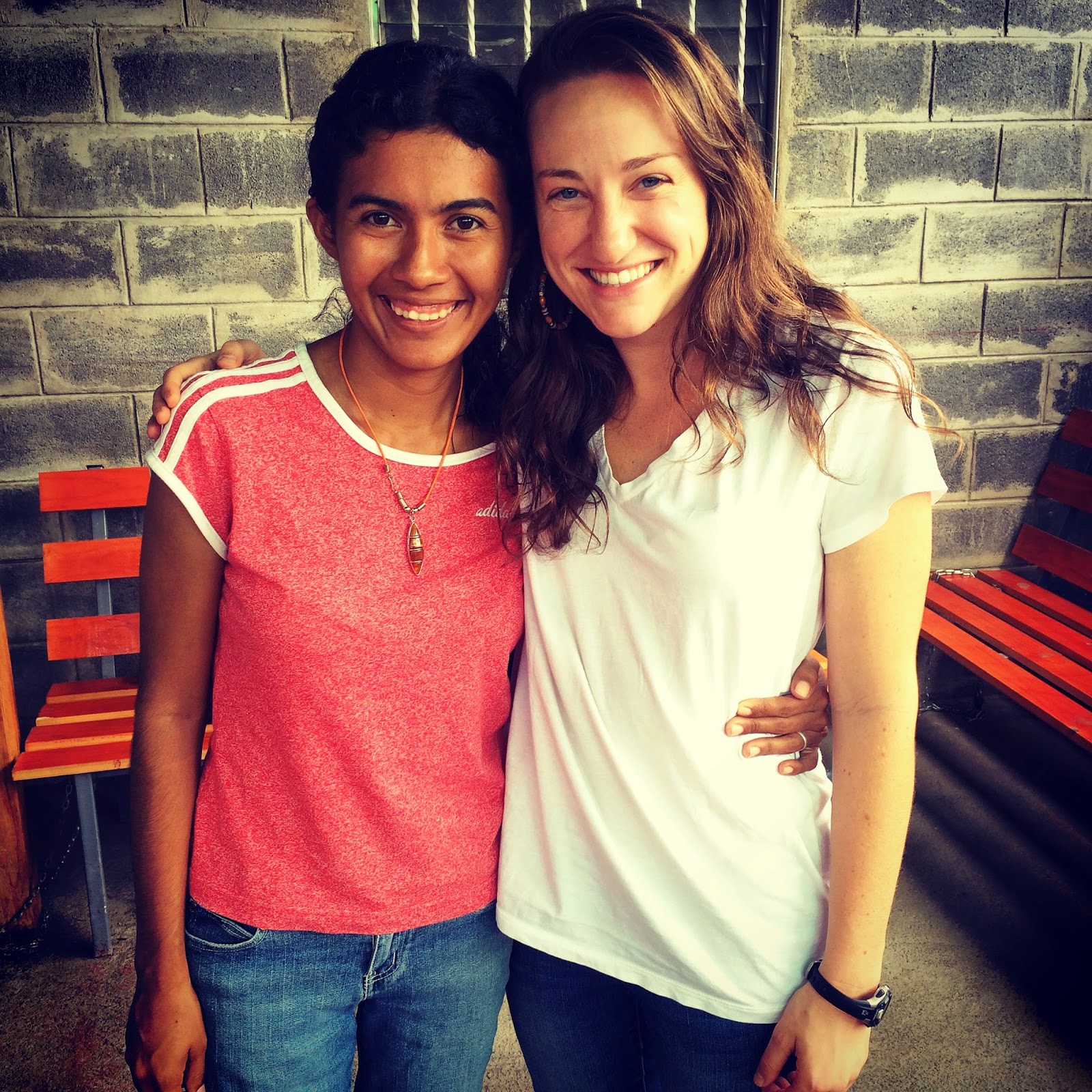 It was a privilege to see Jenny experience so much newness, excitement, and challenge in one day, but it was an even greater privilege to get to know Jenny on a personal level. We spent the bus ride back to Managua reminiscing about humorous events of the day, showing each other pictures of our loved ones, and talking about our families, pasts, and hopes for the future. We did not stop talking for three hours, and even at the end of a very long day, I was sad to see it come to an end because I did not want to say bye to Jenny. Since my first trip to Matagalpa, I have enjoyed our jewelry program and other programs in Villa Guadalupe exponentially more. Now for me, VG is not only the community that I work in, it is a place where one of my dear friends resides. I now see Jenny every Tuesday, Wednesday, and Thursday, and I am grateful that Manna not only espouses relationship-building as one of their core tenets, but that they also grant usactual opportunities to make this happen.

Posted by Concise Itinerary at 9:51 AM No comments: 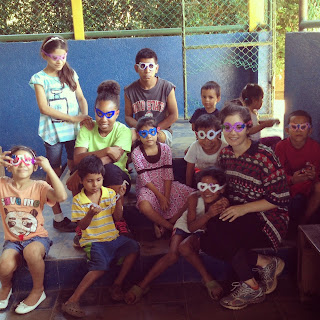 Made crazy glasses with the kids in Camp JAM this week! It was tons of fun and they all looked pretty great in their final creations!