The Land of Sandino and Darío

There are two figures so important to Nicaragua's history that their birthplaces are now their namesakes. The first is Augusto Sandino, the nationalist and anti-imperialist who succeeded in toppling a U.S. backed government in the 1930s and whose name the Sandinistas took on to inspire a nation. Sandino represents one aspect of Nicaragua's history, it's tumultuous cycle of foreign influence and revolution. Rubén Darío represents the other, a vibrant and inspiring culture. 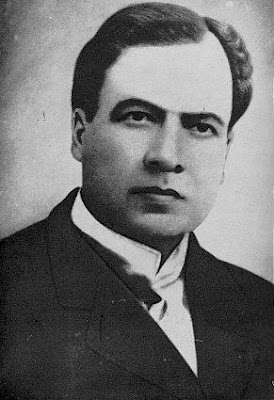 Rubén Darío
Darío, a poet and statesman, began the Spanish-American poetic movement known as modernismo, or "modernism," and is still considered one of the greatest writers of the Spanish language. Reflecting on the nature of his country he once wrote,

To attempt development work prior to understanding its historical context could be equated to lifeguarding before learning to swim. Here's to swimming lessons!


"In no country is it possible to trace the cycle of rebellion and American-sponsored reaction as clearly as it is in Nicaragua. After the United States deposed President Zelaya, patriots rose up in arms against the new regime. The regime defeated them with the help of U.S. Marines. That intervention stirred the conscience of Augusto César Sandino, who launched another revolt and fought the Marines to a standstill in the 1920s and 30s. Sandino was assassinated at the orders of General Anastasio Somoza García, whose family ruled the country with unstinting American support for the next forty years. Its repression sparked the revolution that brought the Sandinistas to power in 1979. Their embrace of Marxism set off the next American intervention, the contra war of the 1980s. That war tore the country apart so completely that voters, given an unexpected chance to express their will, threw the Sandinistas out of office in 1990.

"This reversal gave the United States a chance to redeem itself in Nicaragua by helping pro-American leaders rebuild their shattered country. Instead, the United States turned its back on the country where it had sowed so much pain. This shortsightedness led to a result that shocked many people in Washington and beyond: the decision of voters in 2006 to give the Sandinista leader, Daniel Ortega, another chance at power.

"[Nicaraguans] agree that their country did not suffer because its leaders were passionately committed to hostile ideologies, as it seemed at the time. The war, they now say, was an old-fashioned Nicaraguan power rivalry that had spun horribly out of control after it was swept up into the Soviet-American conflict."


Blood of Brothers is the most accessible and expansive book on Nicaraguan history and culture that I have seen printed in the English language. It is authored by former New York Times bureau chief Stephen Kinzer. It comes with strong recommendations to anyone curious to better understand Nicaragua and its people.
Posted by Ian Rountree at 3:10 PM No comments:

It's official! After many months of planning, publicizing, exploring, and re-planning, Manna Project is officially launching a third site in Guatemala! We are thrilled and we hope you will be a part of this endeavor. Below is an update from our Board of Directors:

The Manna Project International (MPI) Board of Directors is excited to officially announce the founding of MPI’s third international site, to be located in Chaquijyá, Guatemala. This expansion will begin this summer, in July of 2010, when Co-Site Directors Dana Zichlin and Kat Mueller, and an inaugural team of Program Directors, land in Guatemala to formally launch the site and begin programming.
The decision to approve the Guatemala site comes on the heels of an eight-week feasibility trip conducted by Dana, Maddie Jalandoni (Nica Program Director alum 08-09), and Chris Taylor (MPI Expansion Coordinator). During this exploratory phase, the team identified the site location, established promising partnerships with local leaders and laid the groundwork for MPI programming. Based on this preparatory work, we believe that we have found the right community, partners and team to start a successful new MPI site.
Click to continue reading the Board of Directors update. 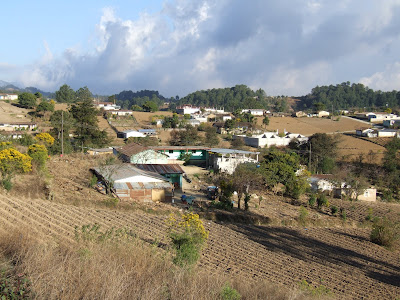 MPI's Guatemala site will focus on the 6,000 person community of Chaquijyá 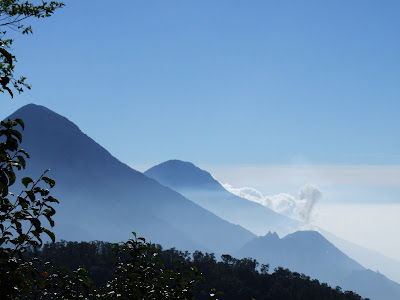 Not far from Chaquijyá are the volcanoes Santa Maria (left) and Santiagito (erupting, right)
Posted by Ian Rountree at 2:49 PM No comments: