Today was Mother’s Day here in Nicaragua, or as they call it in Spanish El Día de Las Madres.  Being an extremely important and widely celebrated holiday, none of the kids had school and no one went to work; pretty much everyone takes the day to dote upon the women who have so much influence in their lives.  So here at the Manna House we organized a Mother’s Day brunch for all of the women that help cook for the feeding program  that takes place in Cedro Galon.  About twenty-five women were invited to come to El Farito where we served them a breakfast of eggs, toast, fruit, and juice and planned different games and activities for them.  The games included ‘pin the worm on the bird’s beak’ (a variation of pin the tail on the donkey’), trivia, and wordsearches, all of which came with the chance to win premios.  The women loved them all.  Chatter, smiles, music, and laughter filled the morning, and everyone ended up having a wonderful time.
After the brunch, many of us program directors and summer volunteers then drove over to Nicaraguan Christian Academy for a Mother’s Day assembly/concert, which is where one of our good friends Dayana attends school.  Dayana is in the sixth grade and we wanted to watch and support her as she sang with her grade.  Lorena, her mom, also came with us.  The assembly was sincere, all of the kids performing songs, skits, and dances to express their gratitude for their moms and families on such a special day.
Posted by Megan Fuson at 7:35 PM No comments:

This past Sunday some of the PDs and summer volunteers travelled to the lake with the moms and children of the CS program from La Chureca.  Every couple of months the PD’s involved in the program throw sort a party or paseo for the families, and so yesterday they all headed to Lake Xiloa, which is a small lake about ten minutes north-west of Managua.  Although the day started out uncomfortably cloudy for a day on the water, most of the moms still came and as the the day progressed the clouds disappeared and the rain held off.  While most of the mom’s stayed out of the water to chat on the beach, the kids were constantly in the water playing with PD’s and summer volunteers.  There were also cookies and bananas to share for a mid-afternoon snack.  Overall it seemed like everyone had a really pleasant and enjoyable time! Here are some pictures of all the fun and activities.

As part of the sports and recreation program here in Nicaragua, program directors Matt, Luke, Will, and Zac coach two baseball teams in the local communities.  Matt and Luke coach a team of players from Cedro Galon, while Zac and Will coach a team from Chiquilistagua. Both are teams in a league of thirteen and fourteen year-old boys and have games every Saturday morning against other teams in the league.  Well this past Saturday they were scheduled to play each other in a double-header, and so Amira and some of the other PD's went out to support and cheer on the guys and their teams.  In the end Will and Zac's team won both games, but both teams seemed to have a great time playing, and walked away with their heads high and in good spirits.
Not only was it fun to watch the program directors' teams compete, but it was also a great chance to hangout with and get to know the summer volunteers, who arrived this weekend and tagged along with us to the event.  Starting this week, the summer volunteers are also going to have their own tab on this blog page so they can share their own thoughts and feelings while being here, and so that their friends and family can track what they are doing.  So keep checking back for all of the adventures and stories that are sure to come for these volunteers in the next few weeks! 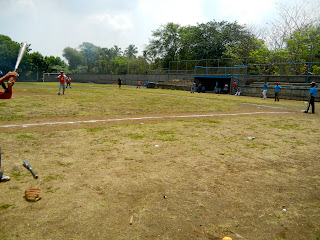 This past weekend some of the program directors celebrated a fiesta de quinceañera with one of the girls, Norma, that lives in the community.  For those of you that do not know, turning fifteen in Nicaragua and in most Latin American countries is a very big deal.  It is distinct from any other birthday because it marks the transition from childhood into adulthood for a young girl.  Quinceañera is the name of the girl who is turning fifteen, and the fiesta de quinceañera is the name of the actual party.  So on Saturday night program directors Carly, Steph, Luke, and myself headed into the community to celebrate.  Upon arriving we were immediately asked to sit down and were served dinner, which consisted of a rice dish, a roll, and soda.   After we ate the rest of the evening then followed a similar pattern to that of a wedding: a father-daughter dance, lots of chatting with surrounding neighbors and friends, many pictures of Norma in her beautiful dress, a cake-cutting ceremony, and lots of dancing. Norma's house and the surrounding area was completely transformed for the party, with pink balloons and streamers everywhere and a DJ playing music.  All of her family and friends were also extremely involved, acting as either hostesses or helping serve food, which made it really special and fun to see.  It was such a beautiful party and a privilege to be able to celebrate with her, and we all ended up having a really good time and were thankful to be able to go. Below are some pictures from the fiesta.

Email ThisBlogThis!Share to TwitterShare to FacebookShare to Pinterest
Labels: Fiestas

Hello Everybody!
First off many apologies for the length of time it has been since the last post!  This past week has been a process of getting back into the groove of work and programs since the week before was Semana Santa, which is the real culprit behind this tardy blog.   Semana Santa, or Holy week, is the week before Easter and an annual holiday here in Nicaragua, meaning kids the the week off from school, adults get off work, and everyone heads out the nearest body of water, or at least most people do.  In the Manna house the program directors all went in different directions, most traveling to at least two or three separate places throughout the week.  Katie and Luke headed up North to Jinotega and then to León, while Steph, Amanda, and new PD Carly visited Esteli, Ometepe, and León as well.  Matt, Zach, and Dane traveled north as well to Cosiguina to stay with a friend and his family, Megan went to San Juan with her family, and Will went back to the States for the week.  Literally all over the place.  Below is a map of Nicaragua so you can better visually understand the different towns that were visited.  Everyone had a really great time seeing the country and furthering their relationships with each other and the culture.  Also everyone came back safe and sound and without any trouble, which is always good news to report!
As it was already mentioned briefly before, we have a new program director named Carly Rees. Carly is friend of Steph's from Purcellville, Virginia and is here with us until August.  Unfortunately we had to say goodbye to PD Joanna Lang the Wednesday before Semana Santa, who left to begin physician's assistant school at George Washington University in Washington, DC.  So even though it was hard to say goodbye to Joanna, we are all excited to welcome a fresh new pair of eyes, ideas, and help to our team!
Posted by Megan Fuson at 12:27 PM No comments: