Maddie and I often say that we need a nap and a cocktail after MPI’s biweekly Creative Arts class. Thirty children are a handfull for sure – but when given handbells, drama props, or the deadly combination of glitter and glue, all semblances of order and quiet disappear. So perhaps we were insane to think it would be a good idea to take these students on a field trip, but Granada (a neighboring colonial town) was hosting a poetry festival. Why not expose them to a cultural world outside their neighborhood? 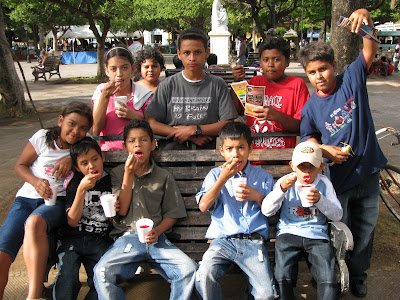 After permission slips were signed and attendance requirements stated, we were left with 14 poetry participants. On Thursday after Feeding Program, Maddie and I loaded the kids in the van and kidnapped Amira and Tressa to help us supervise. The ride to Granada involved many small heads and arms flapping out the windows, some tooting recorders (which they found under the seat, who knew?!), and one stop at a gas station for a poor “I’m going to vomit” niño. But we arrived to the festival with children intact. After dividing into groups, we wandered the main city square and meandered among the booths of poetry books. Despite the aura of refinement and literature, I’m convinced that the kids’ favorite part of the trip was eating raspados (gooey Nica snow cones) before we headed for the van to hit the highway. 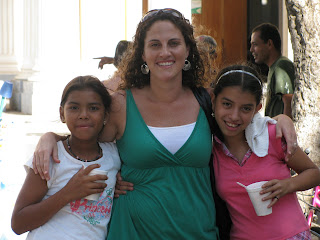 Although it seems fairly insignificant to take a child to a festival and give her a snow cone, I have been recently realizing just how small is the bubble of a world in which these children live. They go to school and they come home. They play soccer in the dirt streets in their barrio and occasionally board a bus with their mothers to buy rice and beans at the market. And that’s all. No family vacations or school field trips or outings to the movies. No exposure to museums or libraries. But part of MPI’s mission is to empower these children – to encourage them in their abilities and to offer them opportunities beyond their limited world. With this mindset, an afternoon trip to a cultural festival in a new city is not only significant, it’s vital. It can open eyes and expand minds to see that a world of prospects lies beyond what they know as day-to-day life.

With a newfound love for poetry and snow cones,
Emily
Posted by MPI-Nicaragua... at 7:49 AM

Emily-
I love reading your posts. It helps us remember what a big deal some of the things we take for granted are (i.e. snow cones & car rides)!

From what I have read, you are empowering these children to the fullest- providing them with creative, meaningful, and fun learning experiences- that they will not soon forget!

Tell Tressa hello from all of us as well! We miss you!
Love,
Abby