I was unaware that a large part of my job description would be "party and event planning." The amount of rice and beans consumed in Nica is an appropriate parallel to the number of parties and special events we've hosted lately (read: LOTS). The formula for a rockin' fiesta is as follows: piñata + soda + cake + reggaeton music + gringos for crowd control during the piñata frenzy. The presence of a piñata jammed pack with cavity creating treats sends children and adults alike into a tizzy. (Side note: the piñatas are often very creepy Chuckie-like dolls or large animals), but I digress. After being swarmed by children begging to have a go at the piñata, one lucky child at a time is blindfolded and starts swinging. The following moments seem to pass in slow motion. Should even one piece of candy squeeze out and fall to the ground, people dive, wrestle and fight on the ground for the treats like their lives depend on it. Often times the child up at bat doesn't realize there are people diving around his feet (due to the blindfold) and continues to swing that bat like he's aiming for a home run. Thank God that no serious head injuries have occurred. A few weeks ago at a giant birthday party we put on for the local children, there were no less than 50 children in a massive pile clawing their way to candy heaven. The icing on the cake was several moms who used their height advantage to tackle the still hanging, yet mostly destroyed, piñata and ripped it to shreds. Planet Earth should do a slow-motion segment on this phenomenon; it is simply stunning to watch. 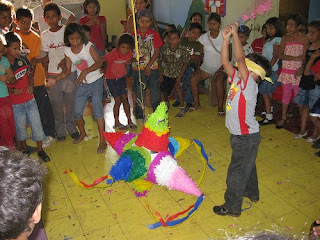 Next to Jesus' birthday, mothers' day is probably the most important holiday in this country. Consequently, we've tried to honor the mothers of the children in our programs and any mothers in the local communities we've gotten to know during our time here (nearly one year!!!!). Monday morning we had a special brunch for mothers only; the idea was to have a classy, relaxing lunch for the moms, a time when they could have fun and enjoy each other's company without the looming presence of needy children. We played a few games, raffled off some prizes and provided a delicious meal of eggs, tortillas, cheese, fruit salad, pound cake and coffee. This morning we had a similar celebration for the Chureca mothers in our child sponsorship program. We brought a piñata, cake, soda and raffle prizes; fun was had by all!

In the spirit of mother's day, I'd like to quickly honor my adoptive Nicaraguan mothers. I lived with their family for a week, teach or coach all five of their children, and recently was the confirmation sponsor for my 'brother' Enrique. Jamilet (the mom) and Gloria (the hilarious and token mildly-crazy grandmother) are incredibly hospitable, loving and generous. Not only that, but they are constantly scheming to find me a Nica husband so I'll live next door to them and stay forever. I feel so comfortable sitting outside of their tiny, dirt floor home surrounded by their loving presence. I know they think of me like a daughter because Gloria often (jokingly) threatens to spank me with a belt for doing something bad. Feliz día de las madres!

Finally, a huge success story on the soccer team front. No, we didn't qualify for World Cup South Africa 2010, but we had a surprisingly successful game on Friday against the Chureca girls' soccer team. This is the fourth encounter of the two teams and due to the fiesty, spunky nature of many of the girls on both sides, I was prepared to break up fights and deal with many a complaint and problem. Miraculously the game went in the opposite direction. Not only did we win 3-0, but I've never seen my girls behave as well as they did nor get along as well. Girls who normally sit out and complain were encouraging each other and playing hard! Two young mothers handed off their babies and ran around with their friends. A few who normally skip practice to make out with their boyfriends showed up and complied with our rules of having fun, no fighting or complaining, and encouraging each other on and off the field. They were sportsmanlike to the other team and a few of the girls really stepped up to be leaders among the team. Plus, they looked great in their matching black uniforms! 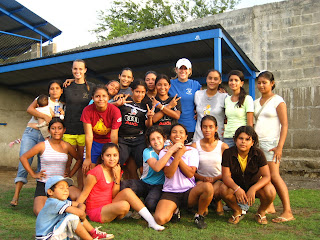 Enjoying actually being a coach instead of a strict enforcer,

Christina
Posted by MPI-Nicaragua... at 9:59 AM