Literacy's (Cedro) weekly trip to the library at El Salero has brought with it exposure to a certain learning device that, while regarded as a typical school wall decoration, is sadly lacking in many Nicaraguan classrooms. That tool is... a world map. I had been very grateful for it and the other Central American and Nicaraguan maps that hang in the August's library, and smiled to see that our students often gazed at them. However, I became slightly less hopeful when at one point I walked up to two of our 14 year-old girls and asked them to show me where Nicaragua was.

After a full minute of moving through Asia, Europe, and Africa with their index fingers, glancing expectantly back at me for my withheld affirmation, I laughed and pointed to Nicaragua for them.

Manna has both Literacy and Mathematics classes to address illiteracy and innumeracy, but an oft forgotten basic functionality is map literacy. In an attempt to meet the needs presented by map illiteracy, and with the added bonus of expanding our students' exposure to world cultures, Kelly and I have incorporated a world tour into MPI's Creative Arts program in Cedro Galan. To help in this venture, Manna has purchased its own world map that now hangs in El Farito, our classroom building. 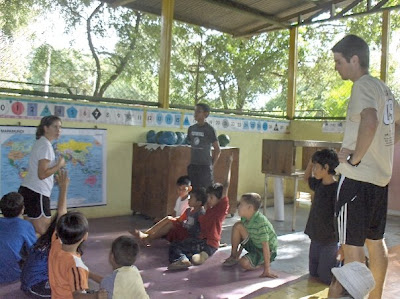 Kelly's Continent Showdown has been a hit with the kids

In an introduction into geography in which we colored our own maps by continent and made paper machê globes. Our study of art around the world first took us to France, where we painted in the styles of Van Gogh and Monet, and also built our own Eiffel Towers from marshmallows and toothpicks. Our next stop was the U.S., where we studied Native (North) Americans, making headdresses and dancing along with a pow wow video. 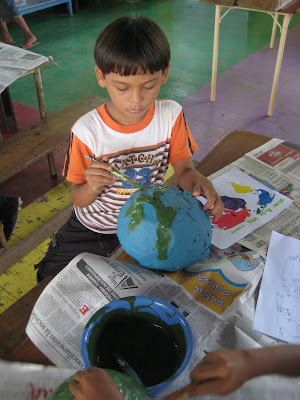 Ulises concentrates on painting the continents on his globe

The United States also presented the opportunity to introduce our class to abstract art, something Kelly and I had been looking forward to, because what better way to express creativity and originality? After a slide show of paintings by Rothko and Pollock, we followed the style of the latter to create our own action art. 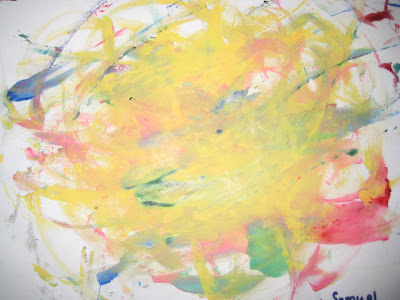 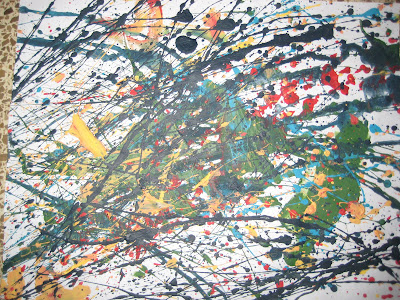 Our world tour through art will next take us to Spain, which will see our Creative Arts class act our bull fighting, the running of the bulls, and bring us to draw our dreams like Dalí and our self-portraits in the cubist style of Picasso.
Posted by Ian Rountree at 6:55 PM

Where can I purchase the art? Geral is a creative genius!