Very few of us would jump into action at the offer to hike an “about to explode” volcano – but we were uncharacteristically brave this weekend! Or perhaps we were just characteristically unaware and uninformed. Regardless, on Saturday morning Mose, Nikki, Christina, Jed, Michael, and I hopped into the car – ready to roadtrip it to León and face the wrath of volcano Cerro Negro. After arriving to the (really sweet!) hostel and wandering the winding streets of this colonial town, we met up with Wilbur, our guide… and our soon-to-be new favorite Nicaraguan man. 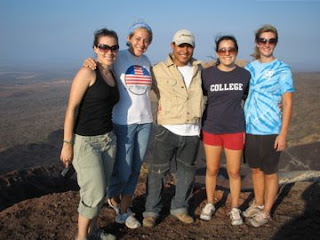 Wilbur (self-described as “short and brown”) led our crew to the foot of Cerro Negro… and then essentially straight up it. The mountain is literally a black sand dune rising 2,400 feet into the air, rockier on the “climp up” side and finer on the “slide down” side. After an hour and a half of trekking uphill and exploring heat vents in the crater, breathing in sulfur, and sticking our hands in oozing hot nooks and crannies, we prepared ourselves for the slide/fall/run down to the base. And it was awesome! – (although it lasted less than five minutes). With the adrenaline pumping and shoes full of sand, we felt like we were flying… 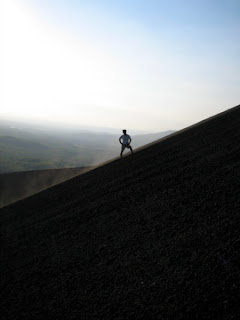 In the car on the bumpy ride back to the hostel, while joking with Wilbur and trying unsuccessfully to clean the grime off all exposed skin, we spoke of what a matchless experience the Cerro Negro hike was. The whole place had felt wild, almost outer-space-like. There were no other humans around; no signs or ropes or railings. We hadn’t filled out a waiver or signed our lives away. It was just simple… call the random Nica guide and then explore. In such a straightforward and minimalistic procedure there shines forth an unpretentious simplicity, one that has ceased to exist in the United States. And we found that refreshing; yet it would have been nice to know that "the volcano will explode any day now."