To reward strong attendance in literacy and math classes yesterday, we took twelve students to Volcán Masaya National Park for the afternoon. A standard spot for tourists, this volcano is active, smoking high into the sky and topped by a giant cross. Although it’s just a few miles outside of Managua, these kids from the rural areas of Cedro Galán had never seen a volcano before, much less hiked to the sulfury summit.

As the micro wound it way up the side of the volcano, we pointed out the dried lava and volcanic rock from past explosions. The chatter amongst the kids was hilarious as they bounced in their seats and discussed how ugly it was and how they wished they could witness an explosion and float away on the rivers of lava! We arrived to the top, clambered out of the car, and peeked over the safety wall into the gaping hole that led down “into the center of the earth,” as a few little boys claimed. After photos at the rim and a short hike to the cross mounted above (where we could barely breathe because of the sulfur!), reactions were divided. Some students continued to exclaim “¡Que tuani, que bonito!” while others thought it was “feo” and just far too smelly to be worth their time. 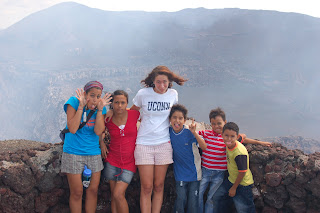 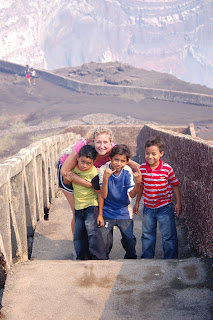 The ride down the volcano was concluded by a short visit to the park museum and then a return to Managua. In typical Manna fashion, we tried to tie this expedition to either math or literacy by insisting that it was Cone Day! A volcano is a cone, funnels are cones, and… ice cream comes in a cone. So we wrapped up the attendance celebration with an ice cream party in El Farito. And we learned that ice cream cones drip wayyy too fast in the heat of Nicaragua! 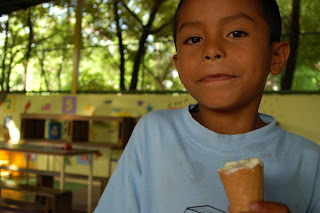 All in all, it proved to be a unique day for these twelve math and literacy students. Though Nicaragua is called the Land of Lakes and Volcanoes, the majority of these children have never had the chance to come in close contact with either. So whether they called Volcán Masaya “feo” or “bonito,” we were blessed to stand beside them as explored such a notable and powerful (and cone-shaped!) part of their nation.

I hope students were required to learn the equation for the volume of a cone. V=1/3 π r2 h

Another fun fact: cars are required to back into parking spots on the volcano to allow for a more quicker evacuation in the event of an eruption!