hello friends, christina here. I hope you enjoy these brief stories about friends, work, events, and life in general from the past few months. les quiero!
– if you know anything about my year in nica, you probably know that the cutest 6 year old on the planet, armando, has captured my heart. a hilarious story recently emerged about his trip to swim in our pool a few months ago. apparently when I told him we were going to my house to swim, he thought it meant my house in the USA. when he returned from the swimming adventure he told his mom that the USA was a lot closer than he thought, and that all of the houses were big like in the soap operas and have lots of stuff in them! bless his little heart, I’m gonna miss this guy! equally as cute was the day we took our students to see the movie ‘planet earth’. halfway through the movie, my coworker michael took all the little boys to the bathroom (small boys, small bladders). armando was completely lost in a modern day, gleaming white bathroom with stalls. michael placed him in a stall and went to help the others. when he returned a minute later, armando was standing in the same position. he looked up at michael quizzically and asked, “where do I do it?” 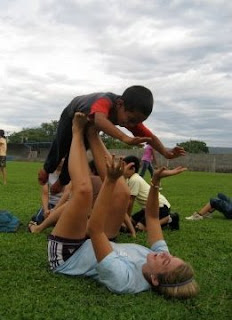 – a few of our fabulous summer volunteers put on a (much needed) sexual education talk for about 15 teenage girls from the local community, all of whom are our students and friends. despite the giggling and red cheeks, they listened attentively and thoroughly enjoyed a time talking with older women and each other about all the things you need to know to be a woman but perhaps never heard from your mom! we cleared up many antiquated myths, answered their many questions, shared funny stories, and ate yummy food. it was a rich time of fellowship with one another and, in our minds, was extremely successful to open a healthy dialogue about sexuality and their body. one of the most frustrating issues I’ve encountered in nicaragua has been the issue of women’s rights and expectations pressed upon them by their culture. women are the backbone of society and get no recognition for it. it’s very common for a girl to drop out of school because she’s pregnant at age 16 (or younger!), and most girls don’t go to school when they have their periods — what an unfair disadvantage to miss 1/4 of your schooling! women slave away raising children, cooking, cleaning, working other jobs and keeping steady homes, and all of the while (most) men run around having affairs and running out on their families. the lack of responsibility and leadership amoung the male population is sad, but can you blame them? they’re only following in their father’s footsteps. 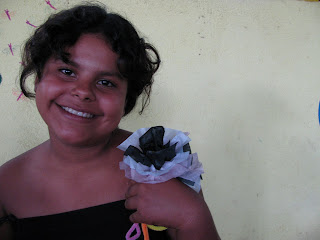 – the girls soccer team from la chureca challenged us to a game, but this time gringas vs. nicas! tressa, the girls in our second group of summer vols and I headed to chureca one friday morning ready to play. the tiny, dirt field was sloped on one end and covered in holes and bumps; it seemed more like a game of pinball at times, the ball would jump around in every direction! at one point I ran into two girls from the other team and slightly sprained my ankle, not fun. unfortunately we ended up in a tie 0-0. most exciting was the crowd the game attracted! many of the moms and kids we know meandered over to watch and ended up taunting + cheering the players on the field.
– the dozens upon dozens of volunteers that stayed at our house this year provided the fuel for a wonderful event: a clothing sale in la chureca with the proceeds benefiting the clinic. with so many volunteers bringing donations, our house had turned into a packed thrift store. kathy august, a local missionary, holds a clothing sale every few months in the nearby community of cedro galan so we modeled our sale on her past events. a clothing sale had never been done in chureca (according to the families we know there) so it was wonderful to bless them in this way! we brought in dozens of suitcases, arranged the clothing and let the madness begin. we followed kathy’s rule of 15: 15 people inside the sale at a time, 15 minutes, 15 items of clothing each. the clothing and shoes were in good condition and we priced them dirt cheap. the line was out the door and we sold an insane amount of clothing! funny moment: a pregnant woman went to check out and tried to buy 30 items of clothing. we explained the 15 item rule and she promptly pointed to her swollen belly and explained that her unborn child counted as another person!
– the tears have begun to flow. tuesday night we had a goodbye / welcome party for the community in our little schoolhouse: goodbye for the old group and a welcome to the new group of volunteers who will spend the next year living la vida nica. the room was absolutely packed by the time we started (about 120 people!). we played a slide show of pictures from the year, said our goodbyes, welcomed the new group, and allowed nica friends to come up front and say a few words. tears were shed, some friends recited poems and played us songs, it was a beautiful affair. looking around the room I was overwhelmed by all of the nicaraguan friends we were surrounded by: students, neighbors, our new families. they will be greatly missed but never forgotten! 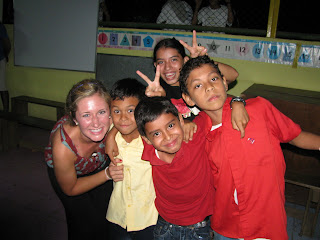 hasta luego, christina
Posted by MPI-Nicaragua... at 10:14 AM